Revenge has the standard black-green of density Rahkshi as a black body with two green stripes, on on each side, running lengthwise along it.  His back spines are thin triangle shapes that end in curved hooks.  He has a special targeting scope over his right eye.

Revenge is smart but is reckless when angry. He doesn't make many friends but is loyal to those he does make. Reading Matoran legends has given him a sense of justice.

Revenge has Level 3 density control powers. He is also a decent fighter and a good marksman (partially because of his accuracy enhancing eyepiece).

Revenge's "father" was reluctant to participate in the Corpus Rahkshi experiment.  Eventually he agreed to donate one Kraata, who would only stay at his house for a little while.  While at his father's house Revenge picked up a book of legends and read it.  He grew so attached to it that he took it into the school as well as the journal his father gave him to "foster higher-level thinking."

Ariving at Corpus Rahkshi He quickly made friends with Rider. He had several adventures, including fighting Metal and visiting the lower levels of Malebranch on an assignment. Eventually Raptor talked him into forming a Kaita. They went to the forests on Nynrah to do it and they ended up being captured by Matoran. After Raptor was killed by Phantom Revenge was next to fight. He and Rider were rescued by a large group of Rahkshi. This motivated Revenge to find a way to Improve the relationship between the Rahkshi and Matoran. Soon after, however, several frightned Matoran were unleashed into the school. Revenge helped to capture them, making it his new goal to find out how the Matoran got in. Needing some time to think he checked out a book and retired to his room. Coming out much later he heard of an attack on a Matoran mining settlement and joined the group going to stop it. After storming a few villages to put the matoran on edge Revenge returned to his room to find a note from his father, and quickly returned home.

When he arrived home his father had a special surprise for him. A brother in Danger. Revenge was tasked with taking care of his little brother and showing him the ropes around Corpus.

"I know that if I ever meet one there will be a fight, but Toa are, amazing.  They selflessly sacrifice for the greater good, they are beacon's of hope for the universe.  I want to be a hero, maby not quite like them, but close."

"It seem's like Revenge is the most popular Rahkshi in the whole school.  Everyone is always thinking about [getting] him." -Smudge8

Revenge was Smudge8's first RPG character. He was partially a self-representation.

Revenge Is an only child.

Smudge8 origionally considered porting Revenge into Bionifight, but decided against it. 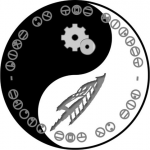