Garrotte is a stoic Lerahk with an odd sense of humor that tends to get her in trouble.

Garrotte is tall and wiry, her armor a dull green carefully painted with intricate black markings that make her look much like a starved viper. Her waist and torso are crossed by two black belts filled with small glowing capsules of poison. Every now and then she may remove another full one from her carapace and place it in the belt. Stray strands of her poison stretch between her spines, fingers, and occasionally her limbs.

When one looks at Garrotte, with her narrow, venomous eyes, looming stature, and intimidating name, they might believe she’s a vicious and unforgiving member of their breed. However, this couldn’t be further from the truth. Garrotte is a loyal and playful friend to those that have earned her trust, though her face doesn’t often show it. It is often difficult to tell when she is being facetious, especially with her odd sense of humor. However, whether it is because of her appearance, humor, friends, or just poor luck, Garrotte often finds herself in trouble, especially with the other Rahkshi, and she would much rather beat a hasty retreat than stay and fight.

Rather than the slimy liquid that most Rahkshi of Poison produce, Garrotte’s poison is thick and stringy, more like sticky syrup. Though frustratingly useless in small quantities (its toxicity is much slower-acting than most poisons), Garrotte has found that large amounts can make neat little diversions or snares that will at least keep a Rahkshi occupied for the few moments it takes her to get away.

Garrotte has met very few people so far, but is growing to trust Vlad.

Garrotte didn’t have much better luck back home than in Corpus Rahkshi. Somehow, her personality grated on her siblings, leading to confrontations her Makuta would have to break up. She always stayed close to his side or among her fellow outcasts, growing particularly close to one brother of hers. They would often find themselves in tricky or even humorous situations that Garrotte would have to get them out of. They shared many memories and much laughter. Unfortunately, Garrotte was called to Corpus Rahkshi before he was. Her Makuta hoped that she could live a better life there than among her siblings.

As is typical with her luck, Garrotte had her sword stolen the first day by the “Welcoming Committee” of Pyle. Afterward, Vlad stepped in to explain her mistake and offer to give her a real welcome. However, they quickly came back in contact with Pyle and Hollow, who had stolen her sword from Pyle. In her panic, Garrotte ran into Grim who just sent her and Vlad on their way.

While Vlad conducted the tour, they ran into Blossom, who decided to follow. Garrotte grabbed a new sword while they toured the armory, briefly observing the tournament going on inside. While Vlad showed them the Courtyard, they met Diode, who ended up joining them (along with Helkyrie) for the Seventh Assignment. 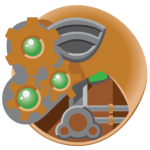